MAR.voip is a patented technology based on piezoelectric actuators that allow existent structures (walls, furniture, glasses, accessory of furniture…) to switch into emitters and structural receivers.

Therefore, this technology is able to create speakerphone calls while the surrounding structure acts as an actuator, reproducing the speaker’s voice and the user’s one at the same time. In this way the conversation suits the environment and permits the user to easily move into the setting.

The system can be linked with any device equipped with Bluetooth or analogic connection (PC, mobile phone, tablet, etc…) and can be used for traditional phone calls, Skype calls or through other communication apps. 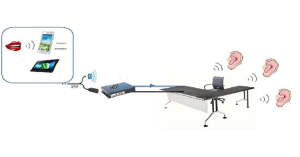 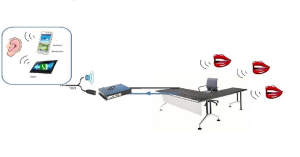 DATA DENSITY. The spatial distribution of the patches guarantees an high “sound density” that allows structures to capture the human voice through piezoelectric elements. Thus, there isn’t a single point microphone for sound/voice acquisition but a whole plane surface: this makes the sound capture level of MAR.Voip equivalent to an array microphone one’s.

FLEXIBILITY. The system can be installed in the most part of the existing structures such as domestic environment or office.

FUNCTIONALITY. Mar.Voip can be used for telephone conversations on speakerphone, for audio message record, videoconferences etc.

SMART TECHNOLOGY.  The system can interface any devices equipped with Bluetooth or analogical output 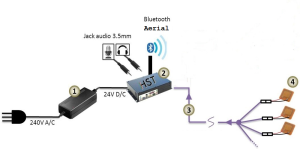 The microphone’s capability is guaranteed by the phenomenon itself, as all the acquired sound waves impact on the structures where the patches are applied. The generated vibration is then transformed into an analogical signal by the endings. Thus, the signal is sent to the amplifier and then to the microphone channel of the device that it’s being used for the call.

By using piezoelectric endings as actuators MAR.Sound allows passive structural surfaces (for example wood, cement, metal, marble, glass, etc) to transform themselves into active ones, and then control them electrically as sound emitter or receiver.

The possible installations of piezoelectric endings are quite a lot: grids, doors, tables, fixtures and any other plain surface can be equipped with MAR.Sound technology.